Jump to latest Follow Reply
Menu
Install the app
You are using an out of date browser. It may not display this or other websites correctly.
You should upgrade or use an alternative browser.
Cities: Skylines 5965 Support & Bug Reports 7841 Suggestions & feedback 2974 Modding & Resources 1871 Official Information & Announcements 139 City Journals and Let's Plays 481 Cities: Skylines Console & Windows 10 Edition 884
Previous dev diary Next dev diary
Hello there, city-builders! It's time to talk about what the academic year is, what kind of events happen during it and also take a look at the very special campus unique buildings, the faculties.

The academic year is an integral part of education and in Cities: Skylines - Campus we have also included it as part of the campus life. Most of the action happens during the year and the results can be seen in a special Academic Year Report that is published after every academic year coinciding with the graduation ceremony.

Academic Year
Academic year represents the time span, 40-week long cycle, after which students graduate and new academic works are created. At the end of the academic year the campus holds a graduation ceremony and the player is presented with the Academic Year Report listing all the things achieved by students and varsity sports team as well as all the events that happened during the year. During the academic year the player is able to hire academic staff to increase the odds of creating Academic Works at the end of the year and the earlier the staff is hired, the higher the chances are to create Academic Works. The academic year progress bar can be seen in the Campus Info panel. When the year ends and if the player has built a Commencement Office on campus grounds, a visible graduation ceremony is held on the building lot. After reading through the Academic Year Report, you are able to take a look at students throwing their academic caps in air in celebration of receiving their degrees. If your city has multiple campuses the academic year cycle synchronizes with the first one.

Academic Year Report
Academic Year Report collects all the details of the previous academic year. Here you can see how the student amount changed, how campus attractiveness was affected by your campus management choices and how many Academic Works were created. Also, reputation change is recorded here also, the report showing the current reputation level as well as the previous level. 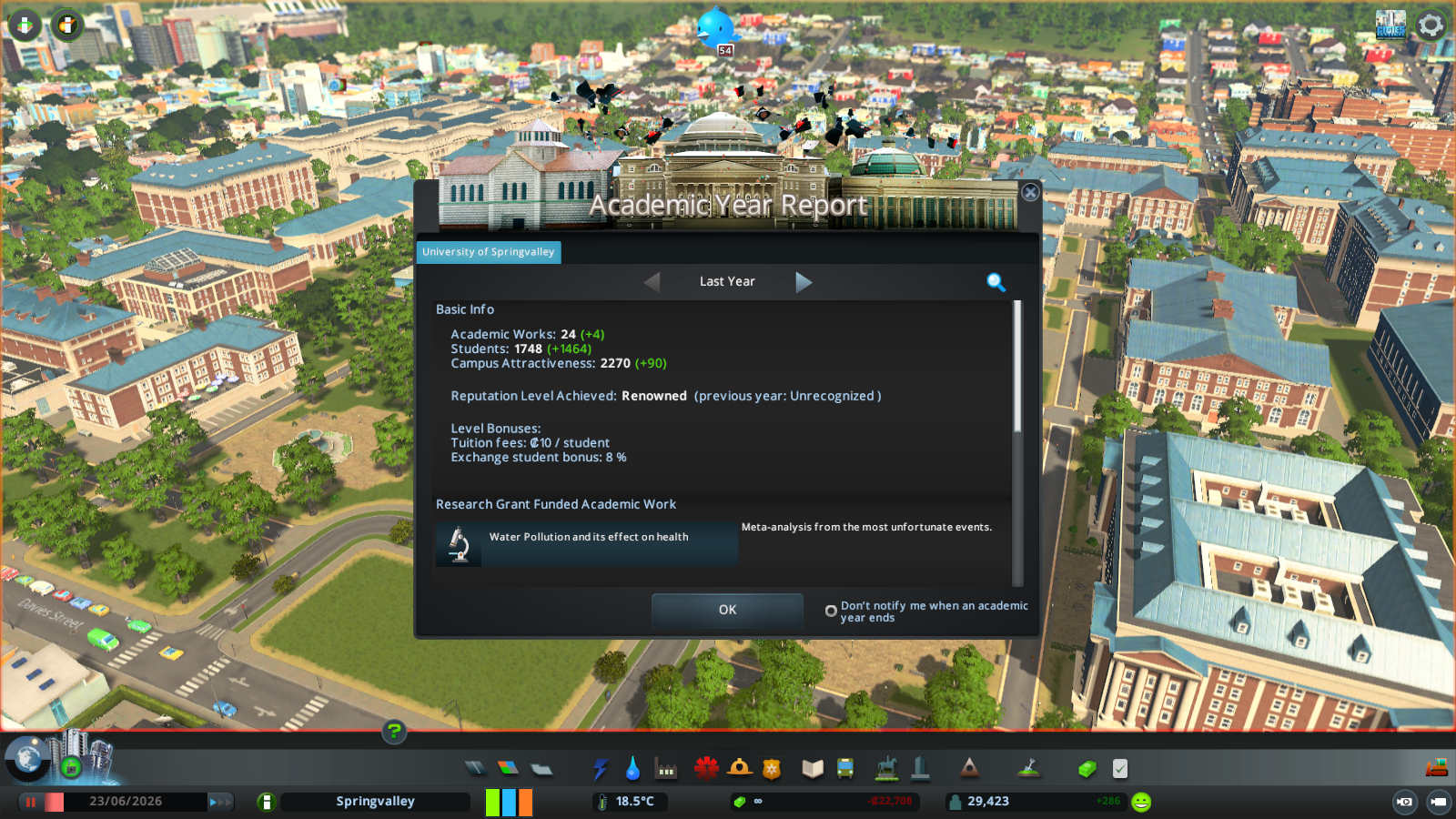 All of the Academic Works that were created at the end of the academic year are listed below the basic statistics with icons for which categories they belong to as well as a description of what the works are.

If your campus varsity sports team has been successful during the year and won most of its matches, it'll get a trophy at the end of the year. These trophies are also recorded in the Academic Year Report per sport type. Each trophy gives a campus attractiveness boost that lasts for the next two years.

School events
During and after the academic year, there are several events happening on campus. Most visible, of course, is the graduation ceremony where students receive their degrees after years of hard study and to massive student loans. After you receive the Academic Year Report, head over to the Commencement Office building and take a look at the plucky young people, ready to face whatever the world throws at them! 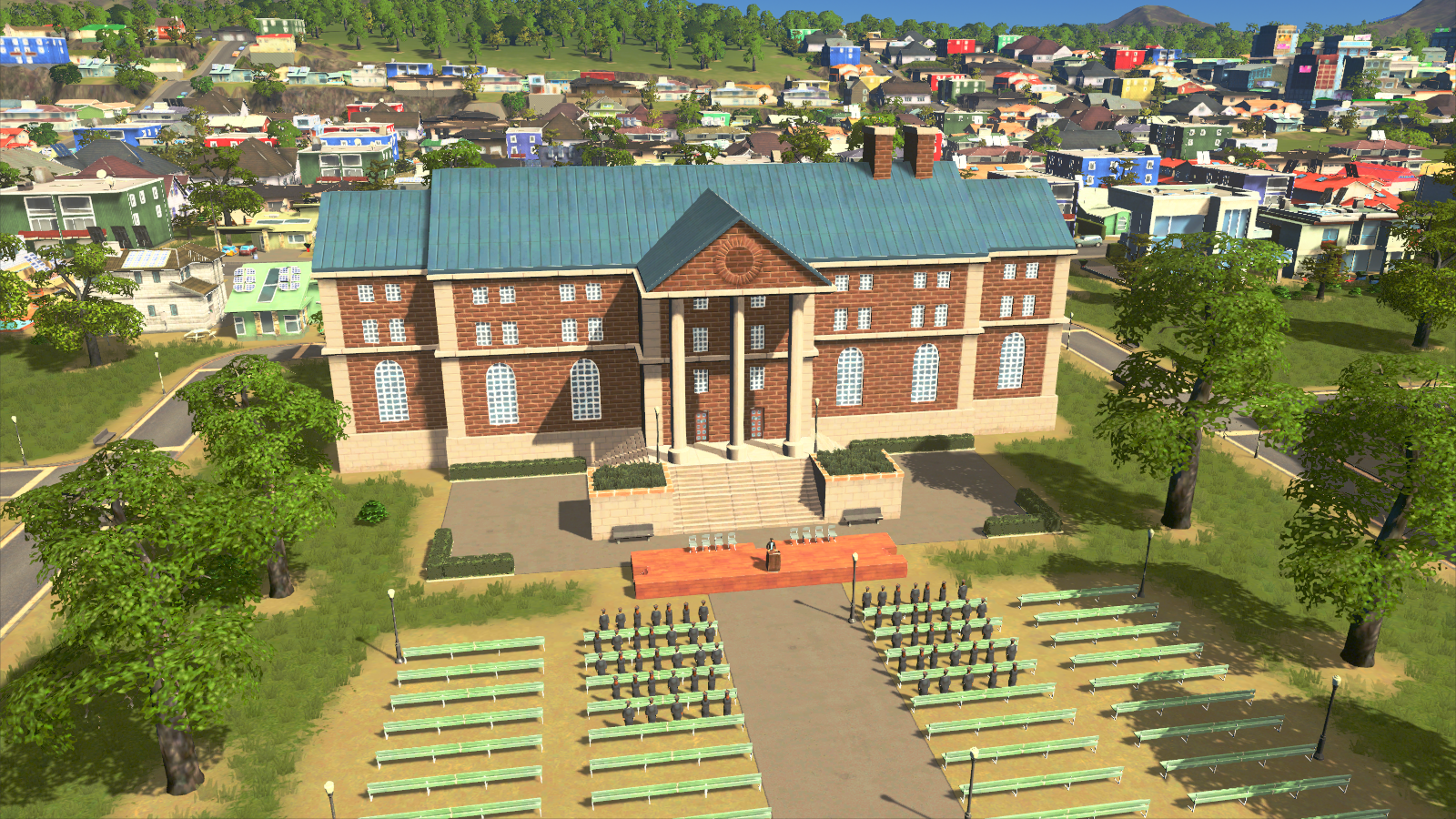 A group of students receiving their degrees during the graduation ceremony held in front of the Commencement Office.

What would the Greek life be without the appropriate parties, right? So, get the linen cloth ready for some fabulous toga party fun! Every now and then the students on campus hold toga parties, turning the the school into a campus-wide party zone. You can see people walking in togas around campus. Of course, some side effects might occur such as trashed campus flowerbeds, broken bottles and egged buildings and thus making the campus groundskeeping crew work extra hours increasing campus upkeep for the duration. But in the end it's all harmless fun so party on!

If your campus has invested in varsity sports arenas, you can host varsity league matches where your team competes against other varsity teams from other cities. In addition to hosting home matches in your own arenas, your team will also travel outside your city and play in away matches. When hosting matches it's good to make sure that road connections to the arenas are in excellent order so that visitors can travel to the matches with ease and cheer the home team to victory. The more people that visit the arenas on varsity sports match days, the higher the chances for victory are.

Unique Faculties
Faculties are a new type of unique building. These massive education facilities are divided into three campus types, each reflecting the nature of its campus. They represent the various academic majors in the world of education and are each visually distinct from each other.

Trade School faculties include the Police Academy, School of Tourism and Travel and School of Engineering.

Liberal Arts College steers more towards humanities with its faculties. These include School of Education, School of Environmental Studies and School of Economics.

University faculties: School of Law, School of Medicine and School of Science.

Faculties are campus buildings first and foremost. They function as an education building similar to other campus educational building but also increase campus attractiveness. Their most special feature, however, is the city-wide faculty bonus they give when built. Each faculty influences one aspect of the city management, from boosting education to affecting crime and increasing income from various zones and more. Faculties are large and expensive buildings but due to their bonuses, definitely worth investing in. They are also visually grand and elevate any campus area to new heights when built.

So, what do you guys think about the academic year and the unique faculties? The bonuses are quite powerful and can really affect the city in a positive way but to unlock them requires work and their upkeep balances the boost they give. Do you have any favorite faculties so far? Write down below and keep the discussion going!

See you next time, city-builders!

Faculties assets are awesome. Art guys at Colossal Order have improved a lot since release!

I like the Unique Faculties giving bonuses. I was hoping for a few more though:

Fox_NS_CAN said:
In the second image above, there is "Water Pollution and its affect on health".
Will having this research have any impact on the city?
Click to expand...

Maybe decreased water pollution? Because this university is similar to the one in SimCity 2013 where you can do research projects to improve your city.
Toggle signature
Recreating Philippine cities and railway projects into Cities: Skylines.

Can the faculty buildings be placed anywhere or do they have to be inside the campus area?
T

This looks so interesting. Can't wait to start playing soon!


Danbyization said:
Can the faculty buildings be placed anywhere or do they have to be inside the campus area?
Click to expand...

Inside the campus areas. The museums are the only thing that can be outside.

Ahhh good, Medical School in the University Campus. I'll be building a hospital next door, so we can have a teaching hospital on-campus!
S

Are toga parties really common? I wasn't in a fraternity, but it seems that my fellow students were quite capable of partying and downing intoxicants without the need for special costumes.

sr383 said:
Are toga parties really common? I wasn't in a fraternity, but it seems that my fellow students were quite capable of partying and downing intoxicants without the need for special costumes.
Click to expand...

Though I am hoping for some Young Ones references...
S

Though I am hoping for some Young Ones references...
Click to expand...

Went to school at the University of Texas. Halloween madness on 6th Street? Absolutely! Toga parties? Not so much.

sr383 said:
Went to school at the University of Texas. Halloween madness on 6th Street? Absolutely! Toga parties? Not so much.
Click to expand...

i know where i'll be putting leisure districts...
Toggle signature
If there are a lot of typos I'm on the couch and I'll fix thrgmbel//
My low character is not the subject of Greek Plays!
#willyoupleaseshutupaboutyourlightningrodsalready
Worst. Playlist. Eva. (but sub anyway)

@co_emmi This all looks good to me but I am concerned that some of the faculty buildings looked rather large, especially if you wanted to build a community college. They looked more appropriate for a university-level institution.

I suggest offering different levels of each faculty building, in the range of small-medium-large. They could all take same footprint size but the actual structure would be differently sized. The unused spaces on footprints with a smaller structure would be basically a reserved space for future expansion. Unused spaces can also be used as green spaces.

Actually, you could upgrade or downgrade the building as needed, more easier than demolishing and replacing it. As always, upgrade/downgrade should at least cost the money. Downgrading, though, would be almost a disgrace and would most likely have some negative impacts, obviously.

To be honest, though, I would prefer that buildings be more modular while maintaining the same footprint size. I would like to see buildings evolves and not stays the same in its looks. I was thinking of that modules concept from SimCity 2013 (IIRC, from what I have read about the game, as an example, you can add a module to give a fire station an additional garage). Modules can be manifested as an additions or wings to a building.

As a note, I mentioned maintaining the footprint size because I am not certain how expanding a building's footprint would work other than simply demolishing both the building in question and nearby buildings to make room for a larger building. As it stands now, it seemed that the building footprint are rigid, one thing that hasn't really changed much since the early days of SimCity. I am not certain how that could be changed somehow. Maybe someone will have an idea one day.

I have questions :
1. will university from base game work the same (infoview panel of the building) ?

3. consequencies between campus, and university from the base game ?

Fox_NS_CAN said:
I like the Unique Faculties giving bonuses. I was hoping for a few more though:

Forestry is typically considered ag, so might as well combine it in game if they were to include it. plus with would make the colleges more balanced with each of them providing bonuses to two industries.
Toggle signature
You're a small price to pay for the success of my mission
K

I do hope at some point we can establish when the academic year starts and when it takes breaks, would be fun to use that to model different regions/ education systems