Jump to latest Follow Reply
Menu
Install the app
You are using an out of date browser. It may not display this or other websites correctly.
You should upgrade or use an alternative browser.
Cities: Skylines 5710 Support & Bug Reports 7177 Suggestions & feedback 2861 Modding & Resources 1814 Official Information & Announcements 133 City Journals and Let's Plays 478 Cities: Skylines Console & Windows 10 Edition 834
Previous dev diary Next dev diary
Hello there, city-builders! Cities: Skylines - Campus, the latest expansion to the game, was announced on the 9th of May and now it's time to take a closer look into what features it includes. The previous Dev Diary worked as a quick introduction to the expansion. Check it out, if you haven't already, and you'll get a nice overview of what it's all about!

So, Campus Areas. What's it all about? Well, it's about education! A great city needs an equally great and awesome-looking campus to match. The Campus Areas use the same area creating mechanics as Parklife and Industries. You can paint Campus Areas using the Campus Area tool and assign a campus type of your choosing by placing campus buildings inside the area, from campus Administration Buildings to dormitories, study halls, club houses and unique faculties. There are three types of campuses: Trade School, Liberal Arts College and University, each with their own, distinct visual style and unique faculties which provide the city with various bonuses.

Campus building do not spawn but are placed next to a road or campus path inside the campus area. The ability to place campus buildings alongside paths gives you that extra freedom to create nice-looking campuses where green areas and the various buildings connect seamlessly. The campus Administration Building works as a hub for all city services and therefore is the only building that has to be placed next to a road in order for the city services to be able to reach it. 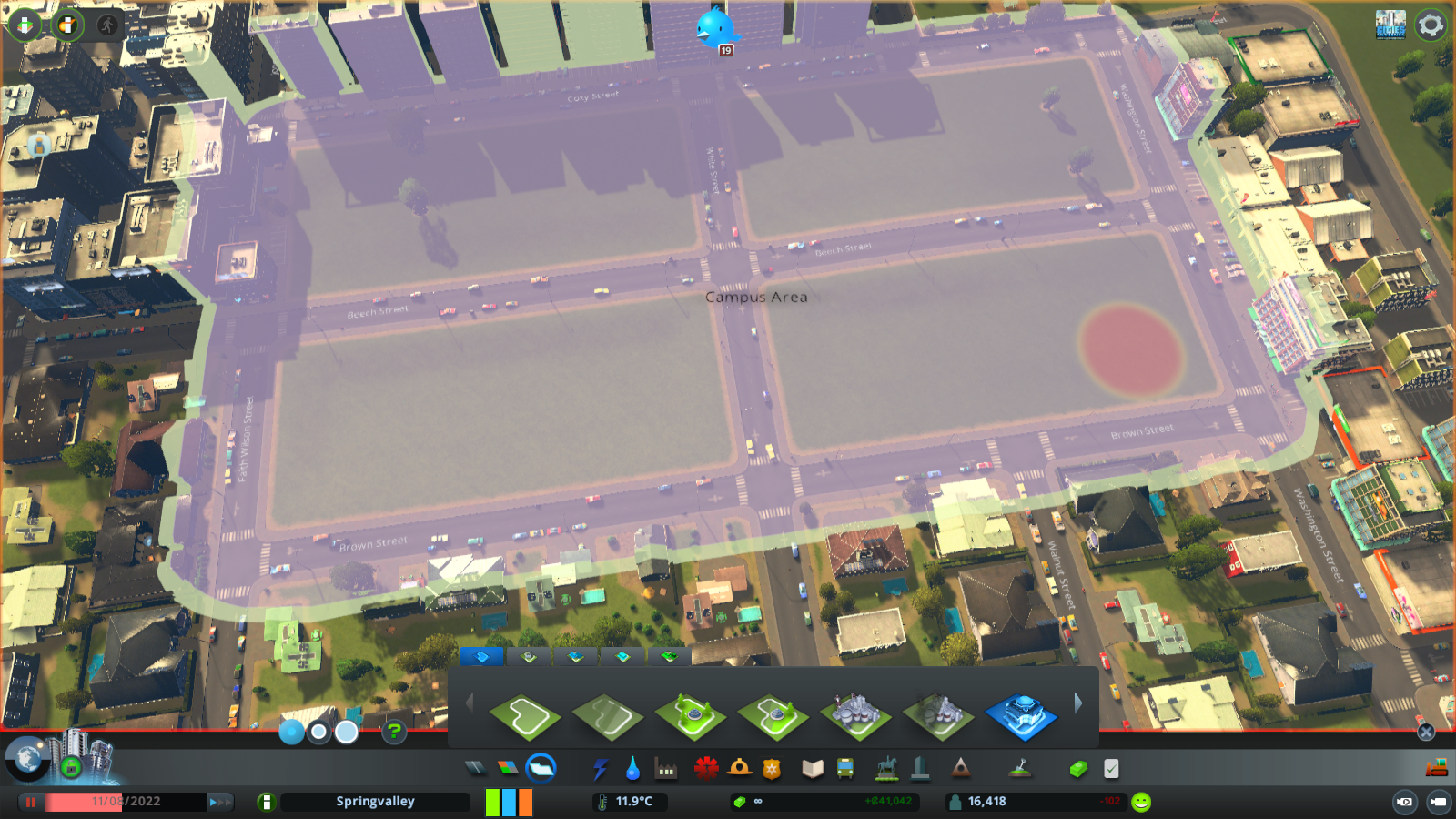 From here on, you can start placing the campus type-specific buildings to increase the campus' student capacity and attractiveness as well as using the campus policies to further customize how your campus functions and creating Academic Works. As your campus meets the requirements to level up in reputation, you unlock more different campus buildings.

Campus Types
There are three campus types: Trade School, Liberal Arts College and University. The basic functionality for all three is the same; they all educated young adults into highly educated citizens. However, each campus type comes with its own Unique Faculties that provide the city with various city-wide bonuses. Each campus type also creates its own Academic Works and unlocks its own unique museum where the Academic Works created on the campus can be put on display.

Trade School is all about the practical studies such as information technology, engineering, hospitality and artisanry. When you need something actual done, these are the folks to do the job. If clothing, fashion, video games and digital entertainment in general as well as new and exciting services and technologies are your thing, Trade School is the way to go. The students are focused on improving the quality of life, bringing into existence exciting new projects such as new ways to build buildings (it's all about 3D printing!) and providing tasty take-away food. 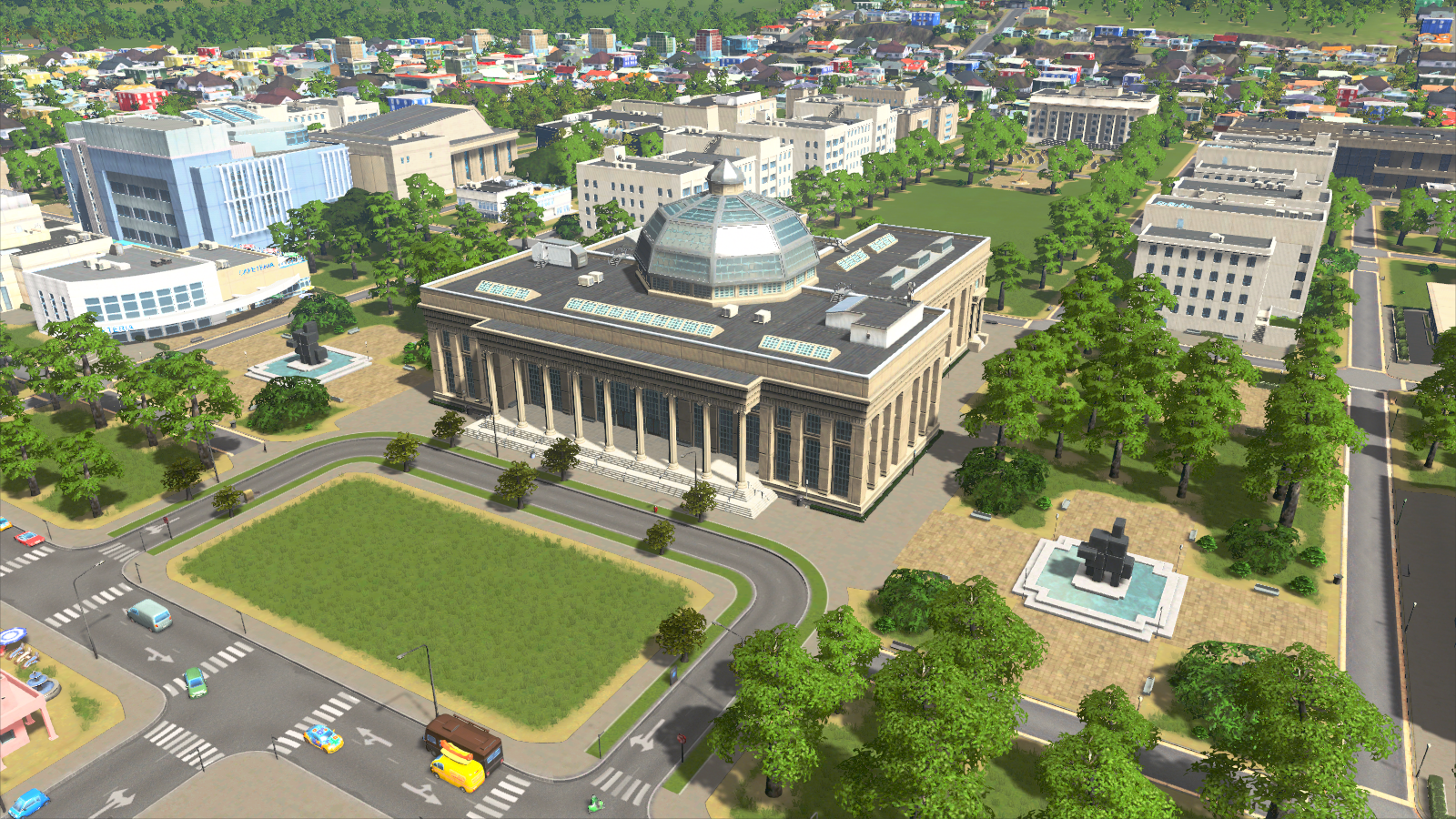 Trade School campus. The glass-domed administration building calls back to the ancient Pantheon-esque design while most of the other buildings represent modernist architecture from the mid-20th century.

Liberal Arts College is where the artist flourishes. The campus focuses on creative endeavors such as film making, literature and music with pedagogy, economics and environmental studies mixed in with good measure. Will the next great writer or film maker come from your college? Is the next platinum record awarded to an album composed within these walls? But Liberal Arts College is not only about creativity and culture. With its faculties you can affect many aspects of your city, from taxation to recycling. 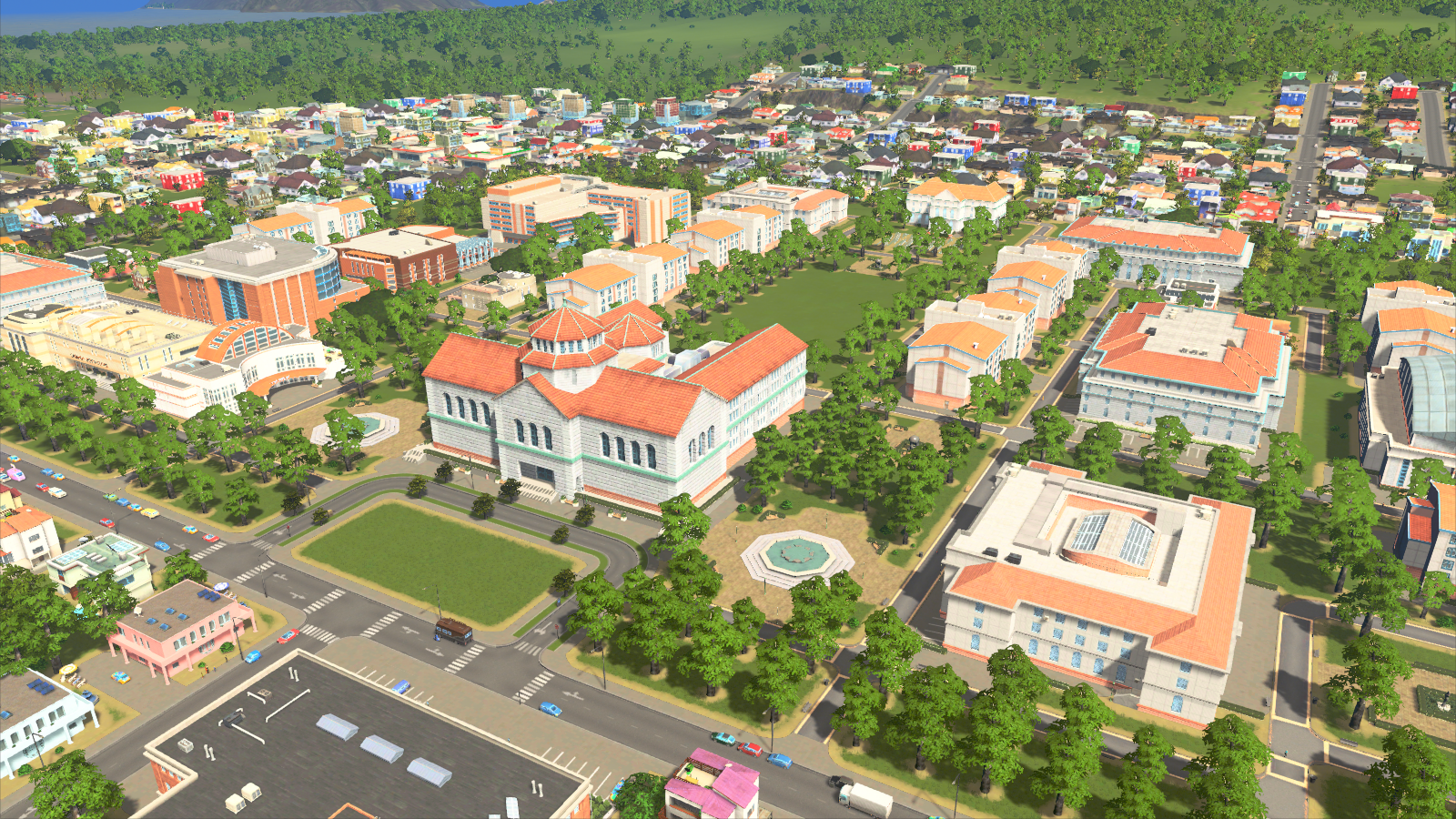 Liberal Arts College campus. It takes inspiration from the Classical Revival style mixed with hints of modern minimalist as well as the American Renaissance and even Romanesque Revival.

University is the home of scientific research and discovery. University students create and apply knowledge by thinking and doing, preparing for leadership through rigorous class work with the spirit of exploration, in a rapidly changing world. The staff is led by professors who are leaders in their fields crafting courses that suit the students' unique needs. Perhaps your university will discover the next scientific theory to rival the Theory of General Relativity. Or, perhaps the students come up with a new artificial intelligence able to calculate the right path more efficiently. 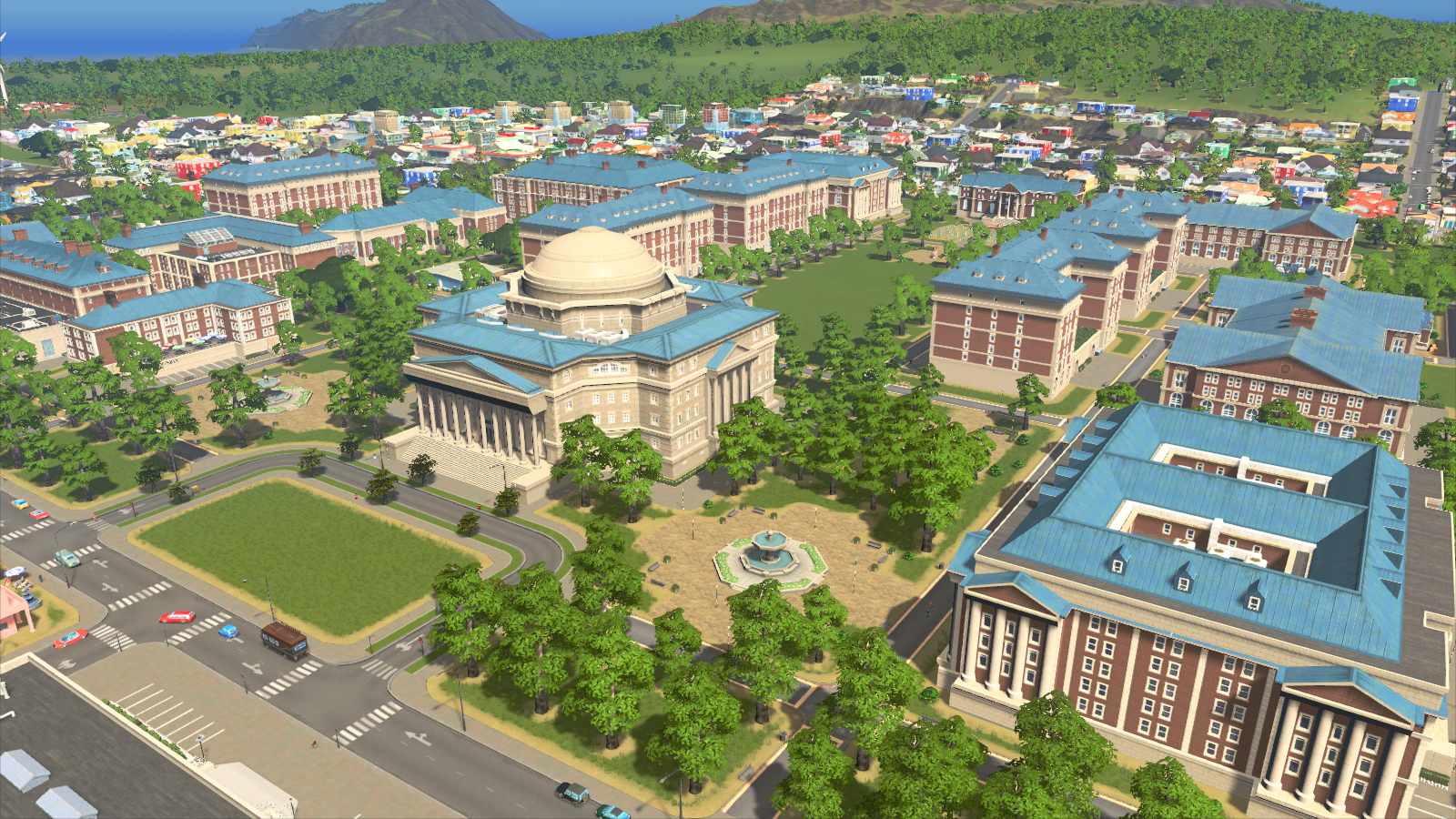 University campus. Its architectural style has been influenced by the French neoclassicism with Gothic and Renaissance elements for good measure.

Campus Area Info View
A new Campus Area infoview is included in the Education infoview panel. From there you can easily check the current status of eligible university students in your city as well as the capacity of your campus areas. 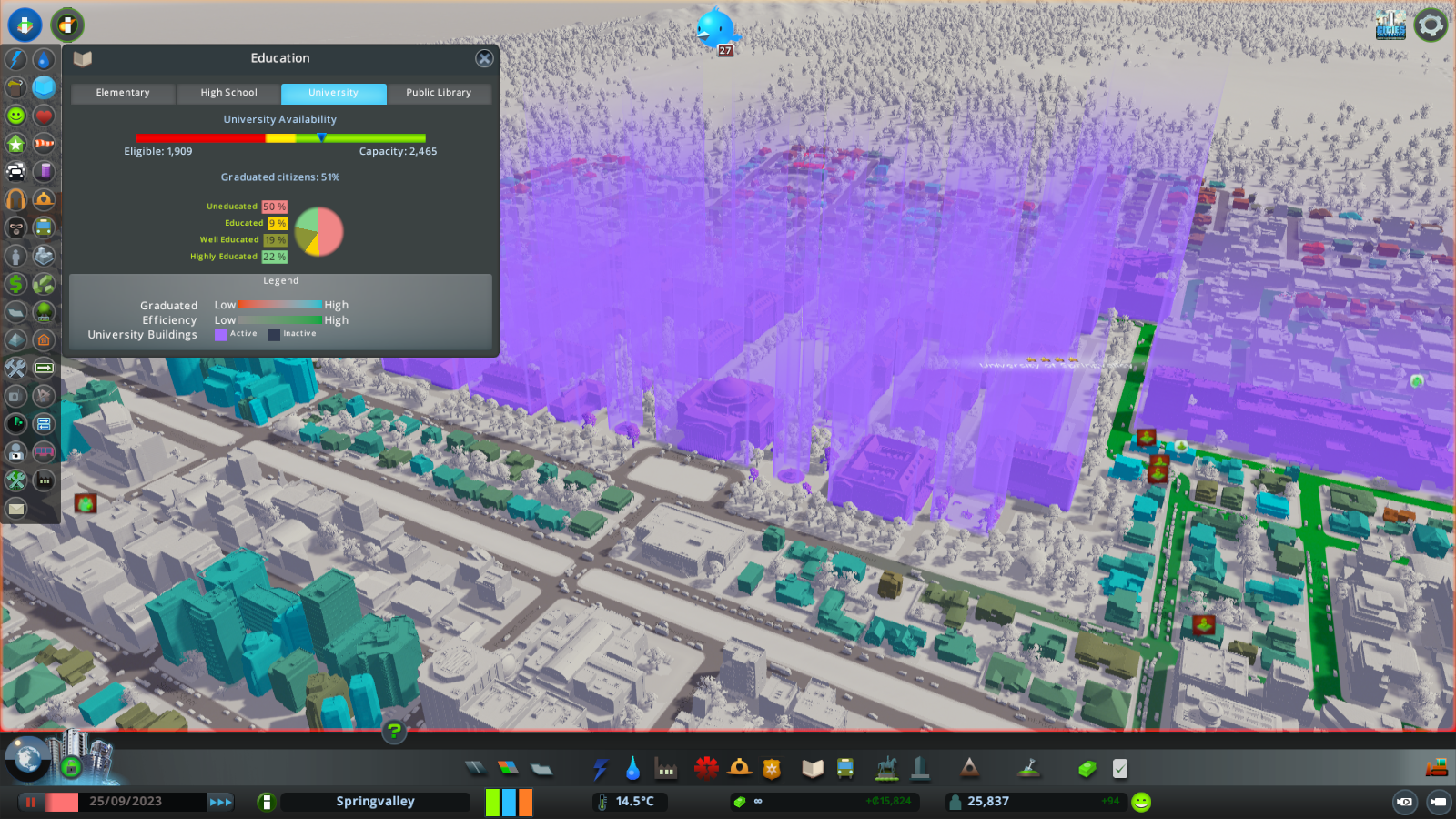 Campus Budget
Campus budget can be accessed from the Campus Info panel by clicking the campus name. Here you can inspect the expenses from various campus features as well as see if your campus is making any profit. Campus budget is comprised of the upkeep of the campus buildings, campus policies, academic staff wages and varsity sports expenses. Included in the budget is also the possible reward money from varsity sports trophies and the collected tuition fee from students unless you have switched on the policy "Universal Education" which makes the campus education free for all students and doesn't yield any tuition fees. As your campus levels up in reputation, you'll gain more tuition fee per student and if you plan your campus carefully, you can even turn your campus into a for-profit institution. 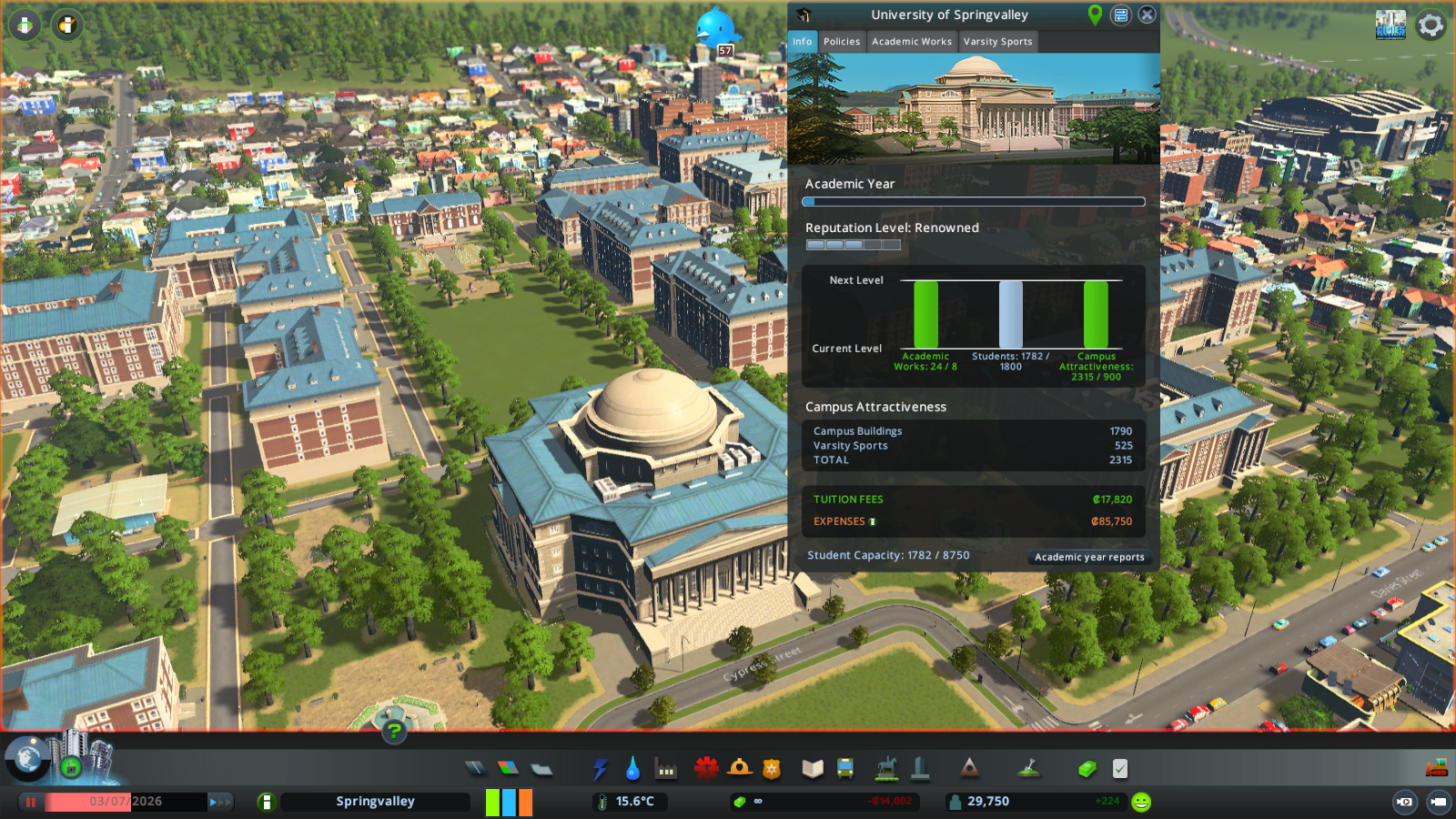 Campus Areas and Your City
Campus areas and universities share the same basic mechanic and stats regarding eligible students and student capacity because they both educate young adults into highly educated citizens. But the major difference is that the campus areas are fully expandable and customizable to your liking and give various bonuses to your city when they reach their full potential.

Campuses are a direct continuation of the base game education system and can work in conjunction with the existing school types and levels. Campuses are designed to be on the same education level as the base game university and therefore they can be used to completely replace the university if you so choose. Instead of placing multiple single university buildings in your city, you can now expand one campus with enough student capacity to cover all your high education needs. 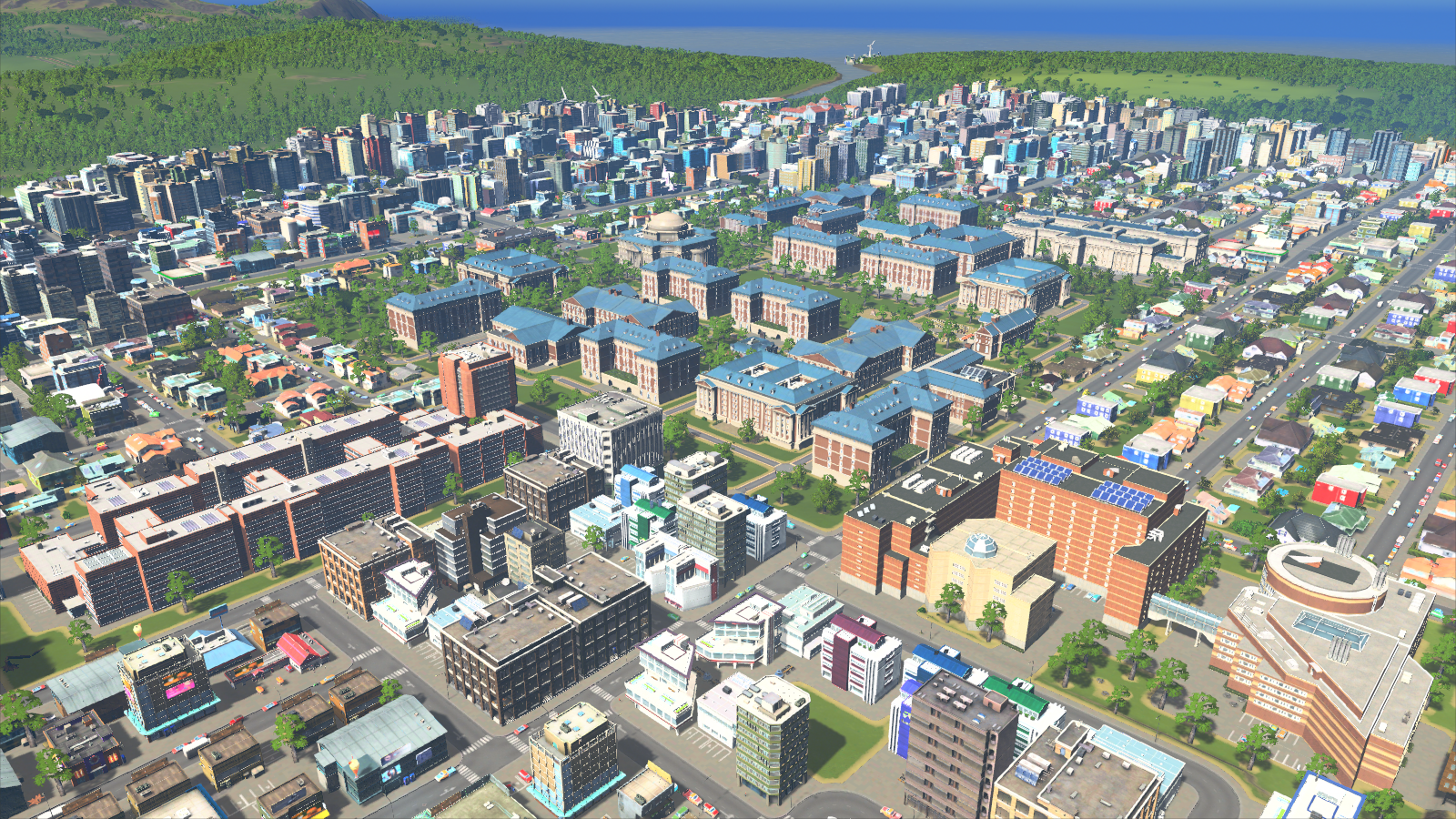 Campus areas can become quite large so it's important to make sure you don't run out of space when you start expanding the campus!

That's all for now! Do you already have plans for a new campus in one of your cities? Which campus type is your current favorite? Are you planning on making one continuous campus area where everything is found close to each other? Maybe you are going for a more sprawling type where the different campus buildings, dormitories and faculties are nestled within the residential and commercial areas? Tell us about your plans in the comments below!

I get to charge tuition as the capitalist gods intended? 10/10 best DLC next to State Capitalism DLC

Combined with the European assets this will really add to a nice historic feel. Love it.
Toggle signature
Hey there! I am using Whatsapp.

I was like "meh..." yesterday, after seeing the trailer (by far, not the best trailer you ever made).

The buildings all look great, but I still need a bit more info I think.

Did you see the announcement schedule? I believe that is the topic for Tuesday.
Toggle signature
My workshop items | List of broken and incompatible mods
M

Lol, some of the assets they showed on livestream were absoluty HUGE....big like airports, i like also their style. Seems like to do a full campus with all buildings you'll need a lot of space, like a minicity on its own cause the buildings are a lot.

I love how CO improved on assets art in those years. Vanilla were too cartonish and dull, but with DLCs they started creating very lovely assets!

Yay! I just finished my freshman year at CUA, so I'm very excited for this.
Toggle signature
"It is not the critic who counts; not the man who points out how the strong man stumbles, or where the doer of deeds could have done them better. The credit belongs to the man who is actually in the arena, whose face is marred by dust and sweat and blood; who strives valiantly; who errs, who comes short again and again, because there is no effort without error and shortcoming; but who does actually strive to do the deeds; who knows great enthusiasms, the great devotions; who spends himself in a worthy cause; who at the best knows in the end the triumph of high achievement, and who at the worst, if he fails, at least fails while daring greatly, so that his place shall never be with those cold and timid souls who neither know victory nor defeat." ~ Theodore Roosevelt, 1910

Keep it up, love the dlc

This looks amazing
I'd love a modern or 70s-modern style main building for the technical college though!

And the art school is a beaut.
I like that all the buildings match even though thats not how it is the real world, we are building them all together not over decades so its good and will look great
Toggle signature
Don't Press the O
Please support this CK Suggestion thread Player Heir
Thank You
R

Mazisky said:
Lol, some of the assets they showed on livestream were absoluty HUGE....big like airports, i like also their style. Seems like to do a full campus with all buildings you'll need a lot of space, like a minicity on its own cause the buildings are a lot.
Click to expand...

Based on yesterday's live stream there's a way around this issue. You can first extend the campus area way out and plop some of these huge buildings further away, then erase out the excess area. You should have a functioning satellite area separated from the main campus (basic districts can also be done like this).
F

That is wonderful. The liberal arts college in this downloadable content looks better than the one in Simcity Societies.

FreedomPei said:
The liberal arts college in this downloadable content looks better than the one in Simcity Societies.
Click to expand...

you can also charge for tuition fees, so once your uni gets well established and increases the prestige level you can bankrupt your students like in real life by increasing the fees.
Toggle signature
How to bypass the Paradox launcher: https://steamcommunity.com/sharedfiles/filedetails/?id=1976349559
Steam review:: https://steamcommunity.com/profiles/76561198168782517/recommended/255710?snr=1_5_9__402
"Is a great game. However, it now comes with a pointless bloatware launcher which no one asked for and no one knew was coming. Avoid."

OK, I'm really looking forward to this one.
Toggle signature
South Carolina is too small for a republic and too large for a mental asylum. -- James Pettigru, 1856

co_emmi said:
There are three types of campuses: Trade School, Liberal Arts College and University, each with their own, distinct visual style and unique faculties which provide the city with various bonuses.
Click to expand...

I would preferred to have the visual styles and faculties as independent from any predetermined "campus type", and let players customize their own university.

For example what if I want to focus my university on "scientific research and discovery" of natural sciences like Geology and Biology, but also include evironmental studies and agronomy, all with the mid 20th century style for my campus?